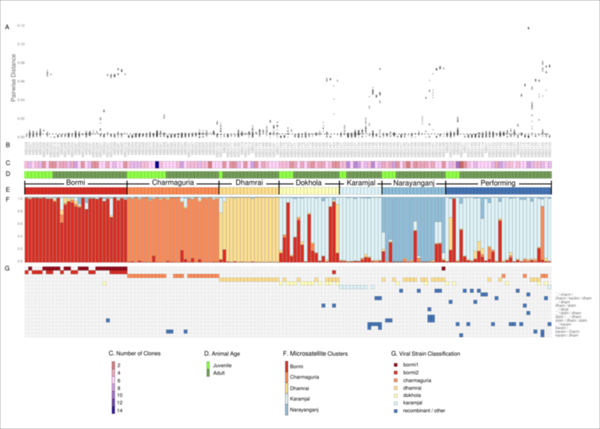 Chris and I have working hard for the past year with the groups of primatologist Lisa Jones-Engel (featured in the book Spillover) and virologist Maxine Linial, doing sequence analysis of Simian foamy virus (SFV). Recently the first paper about that work came out. Foamy viruses are retroviruses that have been shown to be transmitted from nonhuman primates to humans; they are not nearly as well understood as lentiviruses such as HIV. Lisa led several sampling trips to Bangladesh, where simian foamy virus (SFV) is ubiquitous among rhesus macaques. These macaques sometimes bite and infect humans. Maxine’s lab amplified and sequenced a portion of the proviral gag gene from all SFV-positive macaques; microsatellite sites were sequenced from the macaques to infer population structure.

Our results are well summarized by the image to the right (click on it to get an enormous SVG version). Each sampled monkey gets its own column. Row E specifies the color used for the corresponding sampling location, and the names (e.g. Bormi) are the names of the sampling locations. Just below, F shows the results of the microsatellite sequencing put through Prichard’s STRUCTURE program, showing that most of the monkeys within a region are genetically homogeneous, although some (e.g. Dhokola) appear to be more of a mixture. A phylogeny showed significant grouping of the viral sequences, which was formalized by a clustering analysis to define strains; these strains form the rows of section G. Generally, each location had a single characteristic strain, although Bormi had two strains (two shades of red), and Naryanganj had a mix of strains from other regions, as well as recombinant viruses. The performing monkeys also had lots of different viral strains, including recombinants. The top column shows pairwise distances for all pairs of sequences from a given macaque, which peaks when a macaque is infected with more than one strain. It was exciting to make some new observations– monkeys infected with multiple strains hadn’t been seen before, nor recombinant SFV. This was the first paper of several, and the following ones will look at the corresponding human data.